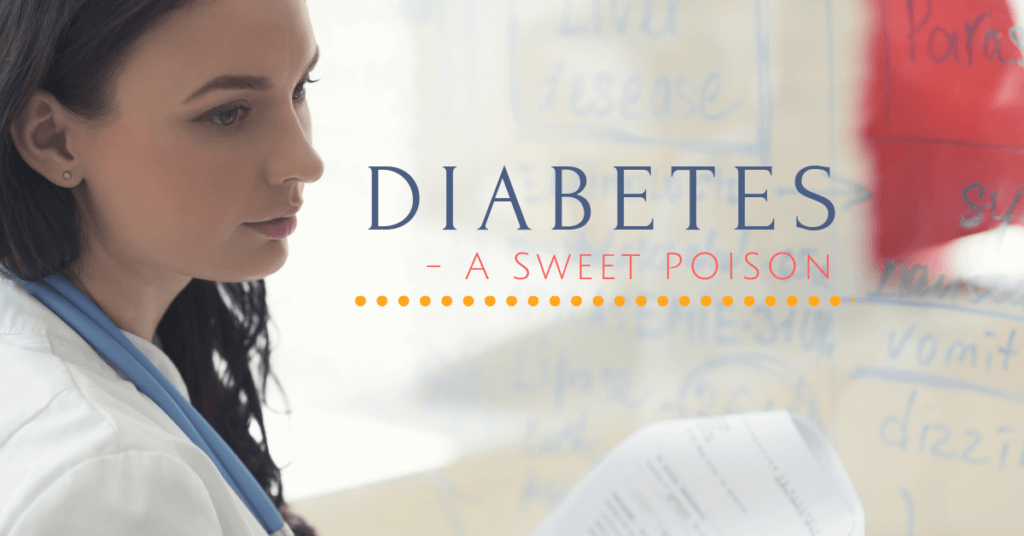 Diabetes, often referred as diabetes mellitus is a metabolic disorder characterised by high blood glucose (blood sugar). It is one of the most prevalent disorder affecting millions of people across the world. Diabetes has been forecasted by WHO to become the seventh leading cause of death in 2030. The prevalence of diabetes is rapidly increasing in middle and low income countries and has become a major cause of kidney failure, blindness, stroke, and lower limb amputation. A healthy and regular diet with physical activity and regular treatment can prevent or delay the onset of diabetes and its consequences can be avoided.

What causes diabetes?
When food is digested, the glucose from the food enters the blood stream and is used to provide energy to cells and promote growth. Glucose can enter cells only with the help of insulin, which is a hormone produced by pancreas automatically in adequate quantity when food is ingested. With the help of insulin, glucose present in the blood enters the cells and blood-glucose levels drop.

Diabetes can be caused either due to inadequate insulin production in the body or if the body cells do not respond adequately to insulin, or both. In such cases, the quantity of blood glucose increases leading to hyperglycaemia. This excess blood glucose is eventually excreted in urine. Thus, even though there is ample of glucose in the blood, the cells do not receive it for essential energy and growth requirements.

Types of Diabetes
Diabetes is broadly classified into three types:
• Type 1 Diabetes: In this type, the body stops producing insulin and thereby it is also referred to as insulin-dependent diabetes, juvenile diabetes, or early-onset diabetes. The usual onset of this type is before the 40th year,early adulthood or teenage years.

Type 1 diabetes is not as common as type 2 diabetes and approximately 10% of all diabetes cases are of type 1. Since the body is unable to produce insulin, type 1 diabetics need to take insulin injections for the rest of their life. Also, regular blood tests and special dietary measures are required to ensure that proper blood-glucose levels are maintained.

• Type 2 Diabetes: In this type, the insulin production is inadequate for proper metabolism or there is insulin resistance whereby cells in the body do not react to insulin. Type 2 diabetes is found among approximately 90% of diabetics worldwide. At times, type 2 diabetes symptoms can be controlled by maintaining proper body weight, a healthy diet, regular exercise and monitoring the blood sugar levels. However, type 2 diabetes is a progressive disease and gets worse eventually wherein the patients probably end up taking insulin tablets.

Type 2 diabetes generally more prevalent in overweight and obese people. People with a lot of abdominal obesity are at greater risk because obesity causes disturbance in body’s CVS and metabolic systems. Physical inactivity and eating the wrong foods also contribute to the risk of developing type 2 diabetes. Further, scientists believe that sugar soft drinks have an alarming impact on the sugar levels. Geographically, people of African, South Asian and Middle East countries have a higher risk of type 2 diabetes.

• Gestational Diabetes: This type of diabetes affects pregnant women. In majority cases, gestational diabetes can be controlled with diet and exercise. However, 10-20% patients may have to take some kind of blood-glucose controlling medication. It is important to diagnose gestational diabetes as it can increase the risk of complications during childbirth.

What is pre-diabetes?
Majority of type 2 diabetics are initially in pre-diabetes stage wherein the blood glucose levels are higher than normal but not high enough to be diagnosed as diabetes. The cells in the body slowly become resistant to insulin and start damaging the circulatory system.

Other signs and symptoms are as under:
• Weight gain
• Unusual weight loss which is more common with Type 1 diabetes as body does not produce insulin and will seek another energy source
• Increased fatigue and irritability
• Blurred vision due to tissue being pulled from eye lenses
• Slow and improper healing of cuts and bruises
• Increased skin and/or yeast infections
• Itching of skin
• Numbness or tingling especially in feet and hands
• Swollen and red gums pull away from teeth
• Repeated gum disease/infection
• Sexual dysfunction among men

Diagnosis of Diabetes
Diabetes is generally detected through urine test to identify glucose levels along with blood test to check the blood glucose levels.

Treatment to Control Diabetes
Diabetes is a metabolic disorder that can be controlled but cannot be cured. Type 1 diabetes is a lifelong disorder with no known cure. Type 2 diabetes also lasts a lifetime, however, it is possible to treat the symptoms without medication, through a combination of diet, exercise, and body weight control.

In case you are troubled with the above listed symptoms, you must consult your doctor at the earliest. Sunshine Wellness Centre is one of the leading rehabilition centres in India also known for the best drug addiction treatment centres in India where we’ve got specialised treatment for diabetes and many more.